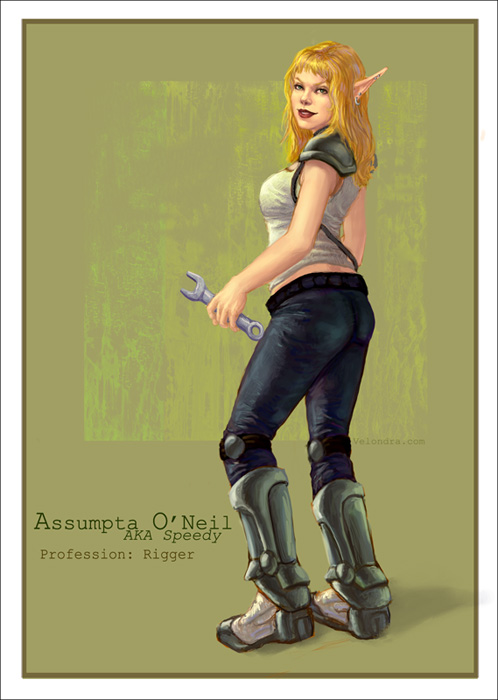 Born in to the discrete put powerful ONeill family in Tir Na Nog, the young Assumpta ONeill was expect to take up the life studying magic and advancing her families social and political standing. They were to say the least a little worried when she started hanging out with the "wrong element" And completely surprised when she ran away from home to become a rigger. With the help of her bastard human half brother Marty O'Rafferty she managed to escape her family's clutches and flee to New Orleans. She started a criminal career as a smuggler rather than a runner working for Raoul Ortega Her borderline insane methods of driving earned her her street name. Smuggling was fun but she was not earning enough to feed her need for expensive toys, consumer goods biowear and cyber-tech so when the word went out that a new team of 'runners was forming and they needed a rigger she jumped at the chance. She has a couple of run ins with people sent by her family but so far has avoided there tender mercies.

These are Speedy's Skill Softs, mostly from Carringtons collection which Speedy "inherited" after his capture.

Played by Joe in the New Orleans Campaign.File:Example.jpg