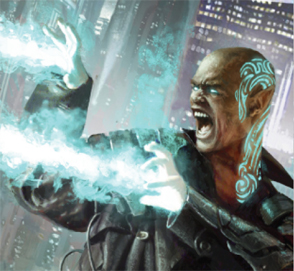 Chen grew up on the mean streets of Hong Kong, he and his sister Mao Yin were orphans left to fend for themselves when their parents were killed in pointless crossfire between rival gangs.

The siblings stood out, both were elves and both felt the call of magic, but while Mao Yin heard the call of the spirts Chen was called to a more practical art, studying first from bootlegged street grimoires and then buying books and chips with the money his new found skill earned Chen began to master the mystic arts.

He soon realised that it was not the subtlty, the knowledge or the refined enlightment that called him to magic but the power, the raw sheer power of bending the universe to his will and unleashing its energies against his enemies.

He took the street name Bane and joined a gang, who were eager to recruit a mage to there ranks and for a few happy years he bent his talents to intimidating rivals, shakings down business and fighting skirmishes with rival gangs. Finally the day came, all out war with a another gang, blood on the streets and bullets in the air.

At the high point of the fighting Bane was awake for 96 hours summoning and casting without restraints, the amount of stims he consumed didn't quite kill him but it did give him craving for more. During the crossfire he witnessed an event that troubled him deeply, an innocent man pinned down and bleeding ignored by both sides.

Thoughts of his long dead parents began to haunt his stim addeled brain, mixing with the horror and death of many of those he called friend as his gang was remorselessly and effectivly destroyed by their rivals. In an effort to preserve his sanity he sought to block out the painful images and desparing thoughts with artifical substitutes, B.T.Ls. The BTLs stopped the despair and kept him functional enough to survive the final defeat of his gang and he was left alone, his few surviving friends scattering to the four winds.

Seeking to build a new life for himself he looked to the only career that his skills and temperament qualified for, that of a shadowrunner. Bane is a violent man, the anger and self-loathing he feels express themselves in aggression and a reckless contempt for his personal safty and that of others. He still takes BTL and stims in small doses. His demeanor is compouned by the fact that one of the few things that still give him unalloyed joy in the world is weilding his magic and most of the spells he knows are destructive ones.

These are my friends or as close as I've got at the moment, mess with them, mess with me.

Killing the entire enemy band Morlocks with a manaball before anyone else had a chance to blink let alone act. In Little Trouble In Big China