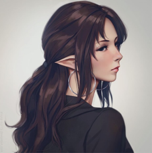 Assessment: Has access to an extensive contact network including within MegaCorps and the Yakuza, as well as more locally within the Seattle Community. Formerly part of an ill-fated group of runners. Has operated as a freelancer since then, often supporting groups as a 'consultant' for individual runs. Seeks to support her mentor, but lacks experience making her an ill-fit for the type of high risk/reward prime runs he is known to be involved with. Her skillset is in infiltration, impersonation, espionage and negotiation. She is also a competent markswoman and knowledgeable in Security Systems. Nogitsune is a budding professional 'consultant' who appeared on the Seattle scene less than two years ago; a young woman^ who initiated very recently with adept powers focused on social situations primarily in person. Follows the Dragonslayer as her mentor spirit; while money oriented, Nogitsune keeps her promises when given.

^She has an impressive copycat ability; able to change height, appearance (including hair, skin and eye colour, as well as apparent age) and voice. Apparently she can even change her metatype and gender; anything except trolls or extremely divergent beings. Nogitsune's actual appearance is therefore unknown.